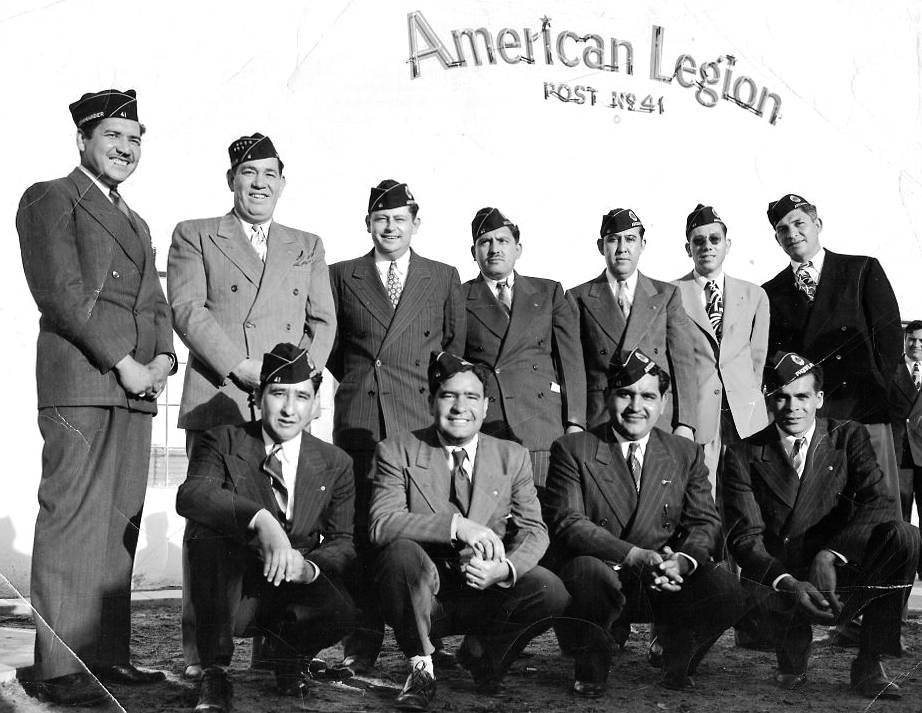 (Click on picture to view the Braun-Sacred Heart Center Update)

The Braun-Sacred Heart Center is pleased to announce the latest update in our Veterans Hall of Fame, Ray Martinez.  The bio was written by Ray’s daughter, Norma Kiermayr, and his great grand daughter, Kaley Kiermayr.  Photos were provided by Norma Kiermayr.  The very fine video interview was conducted by former TV newsman and personality, Carlos Jurado, for the Braun-Sacred Heart Center in 1993.

It is not often that the community can actually see and hear a very important figure in Phoenix history describe the activities and people that played a major role in desegregating a very, very segregated Phoenix, Arizona.  Ray Martinez was a primary force in the formation of American Legion Post 41, which, aside from the camaraderie, was formed precisely to deal with the indignities suffered before World War II.  Ray Martinez personifies the steeled, peaceful, determination of the veteranos who had faced the incredible violence of war in defense of their country, and then peacefully commanded their city to respect their rights.

By clicking on the picture above you will be able to see the following:

Part 1: Descrimination and Segregation in Phoenix Prior to World War II [8:54]

Ever since it can be remembered, Americans of Spanish speaking ancestry have striven to promote the welfare of our country to uphold and defend its constitution and to fight for it proudly in time of war. It is not intended to drop the battle of Justice, Freedom and Democracy merely because the sound of gunfire has stilled.

The American Legion Thunderbird Post No. 41 has pledged itself to serve the disabled, the distressed, the widowed and the orphaned. Its purposes are clearly stated in the preamble to our constitution. To foster and perpetuate a one hundred percent Americanism and to promote peace and good will on earth. To honor the memories of our departed comrades; to remember them lovingly before God and shield from neglect their graves.

The American Legion Thunderbird Post No. 41 was organized in October 1945 with a membership of 16. It was immediately chartered and has been growing in membership ever since.

From its beginning its members made the building of a home the main objective on their program and after more than 2 years of hard and incessant work the dream of its present membership has come true.

The Post's Legionnaires held meetings irregularly for over a year and a half in the Chaplain's restaurant which he closed on meeting nights in order to provide a place to meet. Since ground was broken on the building site meetings have been held at the site. First, under a clear blue sky and finally under the Post's own roof.

To obtain the site for the building, Commander Ray Martinez and Chaplain Frank Fuentes lobbied for a year for a lease on the property. The property belonged to the City Parks Department and it took this length of time to check and transfer titles from here to there and finally break the red tape and obtain the lease.

After solving the site problem, troubles had only started. There was no building or funds to erect one. It was first decided to obtain an Army surplus building and efforts to obtain one proved fruitless. Every time the post heard of a sale, the Chaplain and the Commander and sometimes the Adjutant and Vice Commander sped to it. Trips were made all over the state, but in every instance buildings were sold in lots or were inadequate.

It was finally agreed that a suitable surplus building just could not be obtained so, in open meeting July 15, 1947, the membership unanimously agreed to cooperate and build their own. Before this meeting adjourned everyone had promised to be on hand on July 26, 1947 to break the ground and thereafter to be at the site all their spare time to help in every way possible.  With the splendid sum of $2,700.00 in the treasury, the task of erecting a $60,000.00 home, on the site, was begun and it was only because of lack of funds at critical times that the home could not be completed sooner. The treasury became depleted numerous times and through barbecues, dances and other activities, funds were raised in order to carry on.

On March 14, 1948 at THE DEDICATION OF OUR HOME, the entire organization thanked all our admirers, business firms, individuals and organizations, who through their donations gave the support necessary to successfully complete the great project, from where we hope to benefit those of our comrades who may be in need of assistance, regardless of race, religion, or color.